With a coastline of 3260 km (excluding islands) on the Gulf of Tonkin, the South Chinese Sea and the Gulf of Thailand, the natural resources in Vietnam provide a good basis for marine activity. Vietnam is the world’s fourth largest shipbuilding country and the industry is one of the main priority sectors of the government of Vietnam.

Shipbuilding is one of the priority sectors for the Vietnamese government and shows intention of growing. Despite the grave impact of the economic downturn on the shipbuilding industry in Vietnam, it remains a promising sector, in particular with regard to shipbuilding technology and equipment.

AMOB did not miss this opportunity to share expertise in this field and customer had no doubts to chose us has their partner!

One of our CH170 CNC Pipe Benders has arrived successfully and has already been installed and tested at our client’s facilities. 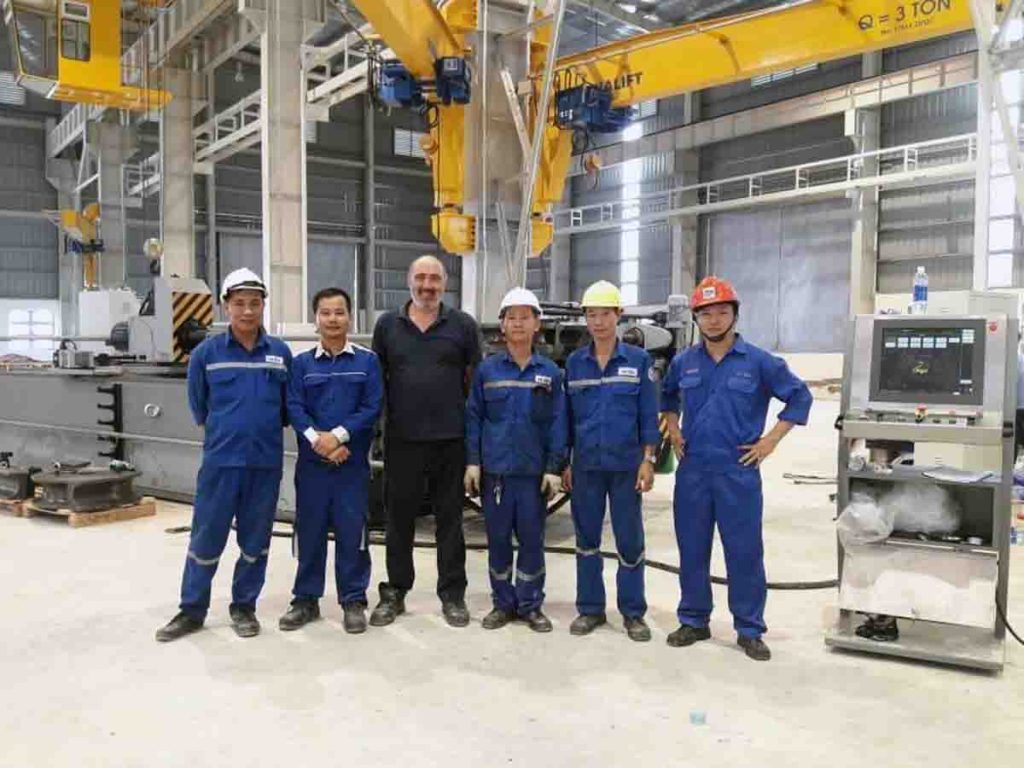 Currently there is a presence of 9 major shipbuilding factories, divided into three major clusters. In the south there are two factories with the capabilities to make ships sized 25 – 50,000 DWT. In the central part of Vietnam there are four factories, able to build ships sized 50 – 30,000 DWT. The overall sector is promising, in particular with regard to shipbuilding technology and equipment. Imported equipment mainly includes marine diesel engines, electronic-hydraulic steering gear, cranes up to 120 ton, air compressors, crankshaft grinders, plasma cutting machines, welding machines and other on-board equipment. Technology transfer in the sector is also a common co-operation with foreign partners that local shipyards prefer.

Our CNC Pipe Bender CH series is the backbone of our pipe and profile bending machines. Their rigidity, stability and untouchable precision in exceptional conditions such as humidity or harsh temperatures is what makes them stand out from the crowd on shipbuilding.

Ranging from 10mm up to 420mm OD this pipe bending machines are adapt for use in a wide range of pipe manufacturing sectors and industries. The range includes the fully CNC pipe bender version, for wich all three axis are automatic in a single stack machine. There’s also the option to add welding detection, punching/cutting mechanisms and integrated loading and unloading systems if necessary.

So, this stores tooling configuration, allows spring-back compensation and boasts anti-collision technology, amongst other features.

Interview with Manuel Barros, CEO of AMOB Tube Be...

By continuing to browse our site, you agree to our use of cookies.